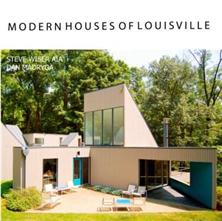 It can be purchased at Steve’s site, wiserdesigns.com. “Steve has authored 3 house design books on Louisville.  These 3 books are based on the fact that Louisville consistently ranks high as one of the best places to live in America. It was named the top livable city in 2012, 2008, and several other years over the past few decades. To be a great place to live, there has to be good, desirable neighborhoods and the city has many such as Old Louisville, Highlands, Cherokee Triangle, Crescent Hill, Audubon Park, just to name a few.

And, within these great neighborhoods, there has to be good residences in which to live. Thus, Steve and photographer Dan Madryga sought to profile some of the noteworthy houses in which to live within Louisville.  And, thus 3 books were developed on different housing styles: Modern, Distinctive, and Historic.